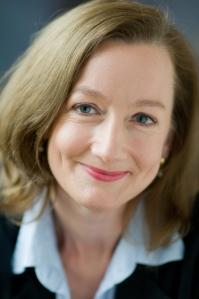 Susan W. Kemp has a BA in drama from the University of Washington and has been a marketing/technical writer and editor for twenty years. Contact her at susanwkemp(at)outlook(dot)com. 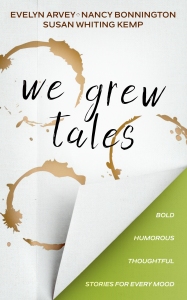 We Grew Tales is a collaboration of creative storytelling. Three Northwest authors present speculative fiction, humorous, and literary tales, without apology for the wide ranging styles and subject matter. Indeed, the variety is what makes this collection so enjoyable to read!In “Jesus on a Rocking Horse,” a disabled woman and a homeless man see an image of Jesus in a dirty alleyway. In “The Era of Trolls,” a woman must defeat a holographic Internet troll or be attached to it indefinitely. In “Out of the Flames,” two sisters discover a dark secret from their childhoods that will change their lives forever.

The book is written in two parts, reflecting the authors’ interest in exploring two different creative processes…or two ways to grow a tale. The first half are stories conjured up in the traditional—albeit elusive—manner of storytelling. That is, a seed of an idea is fertilized in the mind, transformed onto the page, and finally shaped for the reader’s consumption. In the second half of the book, the seeds are planted as prompts—nonnegotiable starting points to spur the imagination. While both methods are familiar to experienced writers, it is up to the reader to decide which yields the best harvest.

We Grew Tales is excellent for:

The Opposite of Coronavirus — Wilderness House Literary Review

Susan has also published nonfiction articles in Marketer and the Seattle Daily Journal of Commerce.

What one reader had to say about Susan’s writing: “It is like you took a slice of life and looked at it just about 60 degrees off.”

The Life of Susan

Susan was born in Bellevue. Not the mental hospital, but the city in Washington State, USA.  At that time, it was known as a bedroom community, which must have had a profound affect on Susan, as she often sleeps in bedrooms.

Susan grew along with Bellevue, which now has many skyscrapers. Susan owns no skyscrapers, but she works for a company that designs foundations for them. Coincidence?  I think not.

After a brief stint at the University of Washington, Susan moved to Zurich and later Paris to be an au pair. This was a disaster, because although she could have written the Nanny Dairies, her employers in three different families were too nice. She eventually returned to the United States (and the University of Washington), unknowingly deprived of this potential fame and fortune.

While in Zurich, Susan performed street shows to earn a little extra money (her au pair jobs were, shall we say, not highly funded).  A concerned citizen informed Susan that she was good, but she would be better if she went to Paris and studied with Etienne Decroux (translation: you’re really not very good even though people put money in your hat. Go take a class with the guy who taught Marcel Marceau). She did, and also took classes with Ella Jaroszewicz, Marcel Marceau’s ex wife (is there a pattern here?).

With a degree in acting from the University of Washington, Susan has, of course, held a number of different jobs over the course of her, well, career. She has been a marketing professional for quite some time now, but occasionally she looks back to other successes with a certain nostalgic longing.  There was that two-day stint as a department store temp in the men’s tie department. She began with no clue how to match a tie to a suit. By the end of the day, she was flinging ties like a rodeo cowboy, to the awed applause of onlooking shoppers.  There was the gig at the Windows ’95 opening at Microsoft when, dressed as a computer (head encased in a monitor, silver spandex body suit, don’t think about this too much), she got within a stone’s throw of Bill Gates, Jay Leno, and a hoard of photographers who were following them around. Not that she would have thrown a stone. It’s just an expression.  Of course, nothing could match the day she spent wearing a gorilla suit and an Alex Trebek name tag on a Washington State ferry (this is true, you just can’t make this stuff up).

Some time back, After 127 million comedy improvisation performances, 567 million mime/dance performances (numbers subject to revision), and a few commercials, Susan set aside the spotlight to concentrate on writing.

And so she is. Writing. She hopes you enjoy it.