A Malcolm Gladwell article in the June 24, 2013 New Yorker poses an interesting idea: ignorance as a fuel for creativity. Gladwell tells about a planned railway line from Massachusetts to New York through a presumed “soft rock” mountain. The mountain turned out to be of hard rock, and the engineers had to be creative to come up with a way to overcome this obstacle.

This reminded me of the times—so many of them—when I hadn’t seen the fatal flaws in my endeavors. Looking back, I’m glad I didn’t know the difficulties I would run into, or I might not have tried and succeeded.

As for the times I didn’t succeed, they still added to my life experiences. I would be a different person now without them, and I’m not sorry I tried. As a matter of fact, some of those failed experiences aren’t true failures, since I believe that everything I’ve done or learned in life supports my writing, either directly or indirectly.

What good is knowing about this principle of ignorance? Is it possible to apply it to yourself, and use it to achieve more than you might otherwise? It would be difficult, short of hiring a hypnotist, to deceive yourself about the chance of your own success in achieving any particular goal. However, you can be fully aware of the potential failings, yet still apply the principle. You can deliberately attempt a goal that hasn’t got a chance of working. And then, once you’re halfway through the mountain, pretend that the entire State of Massachusetts is counting on you.

By the way, although the photo above (Granite Mountain) seems to represent a hard rock mountain, in reality it is a perfect example of success in spite of ignorance. When I chose this hike, I didn’t realize how difficult it would be. But once I started, I wanted to finish, and pushed myself more than I would have under less ignorant circumstances. 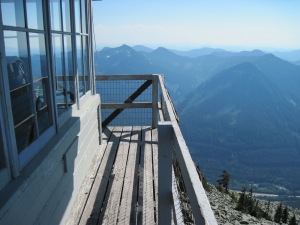